My CRNA Journey: Surgical Tech To CRNA- The Unbelievable 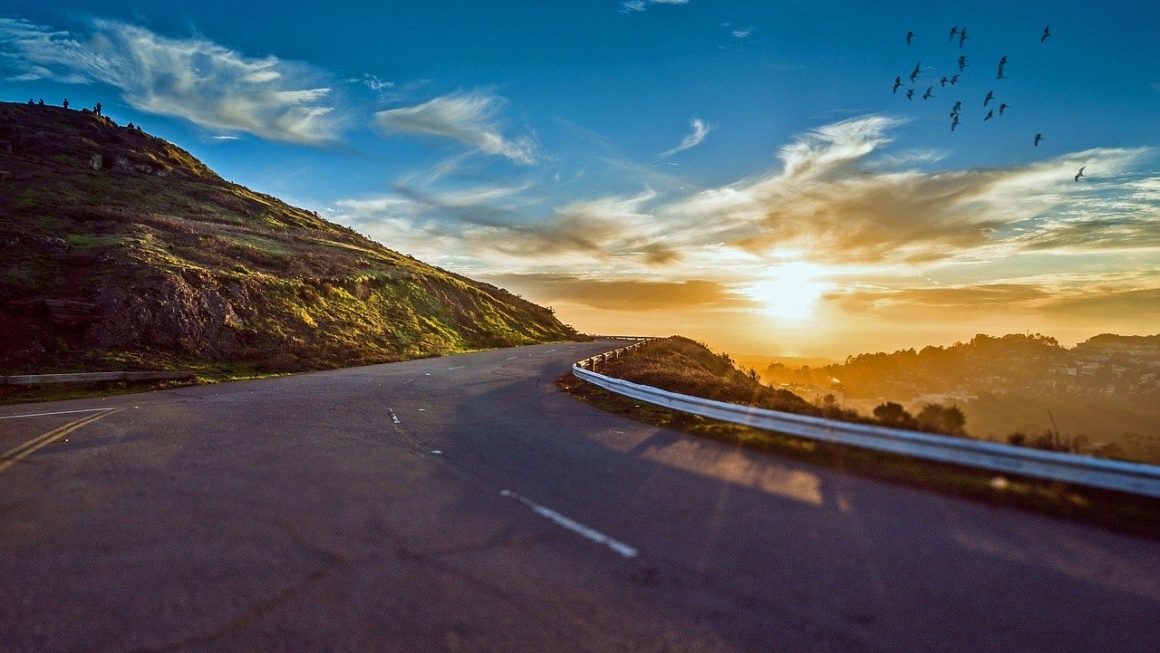 If you have taken the time to read this, you are probably thinking, “This is impossible”. But, I am here to tell you it truly is possible and my hope is my CRNA Journey will inspire you to follow your dreams and become a CRNA or whatever your heart desires.

If you know me personally or have followed my blog, you may know a little about my story. Whenever I am given the opportunity I like to share my journey with others. This past year in particular, I’ve had the opportunity to sit still and really think- how did I do it- and more importantly how I can help others on their journey.

How about we start at the very beginning….

WHERE IT ALL STARTED

My CRNA Journey began when I was studying to become a Surgical Technologist back in 2003. During this time I decided I no longer wanted to work in the Engineering field but wanted to switch to the medical field. I decided I wanted to be a Registered Nurse (RN).

Well, why were you studying to become a Surgical Technologist if you wanted to be a RN? Wow, that is a great question- I was placed on the waiting list for nursing and ran into a lady from my church, Ms. Vandiver, who happened to be the department head of Surgical Technology. And low and behold she persuaded me to sign up while I was on the waiting list for a spot in the associate degree nursing program.

I remember being in clinicals in the operating room and always seeing a person at the head of the bed. I noticed how they controlled the room and watched everything intensely. However, I still didn’t know exactly what their title was and didn’t dare ask for looking really dumb at the time.

But once I became a Surgical Technologist, I quickly learned the person at the head of the bed was a CRNA. Learn more about becoming a CRNA here. I became friendly with some of them. And when I was not scrubbed in on a case I would be available to hold the mask or hand them the endotracheal tube during intubation.

I remember one day I was doing just that- helping the CRNA. And a CRNA, Carol Morgan, told me I should think about being a CRNA. Said she thought I would be great at it. I thought… What…. Me a CRNA. I’m not even a nurse yet. I asked her if she really thought I could do it. And she answered YES and laid out the blueprint for me.

The Plan To Become a CRNA

By the time I graduated with my associates in nursing in 2007, I knew then I wanted to become a CRNA. Carol had given me the plan. Now was the time to just implement it. The plan she laid out was actually pretty simple:

Sounded pretty simple, right? Well, I was thinking the same thing. The first part of the plan I accomplished with no problem. At least for the first two years. Months after starting my new nursing job, I realized no one seemed to like me at my job and it was an absolute nightmare. American Nurse, a well- known nursing site, says there is definitely something to the idiom “nurses eating their young”. Which is definitely what I experienced.

My entire plan was derailed after I left my position in ICU because of the personal attacks, anxiety and stress I felt every time I stepped foot in the unit. However, I found the perfect job- in Post Anesthesia Care Unit (PACU) at another hospital. Yes, I absolutely love PACU still to this day. But this was not part of the plan Carol laid out for me, this was part of the CRNA Journey.

It took around 2011 for me to feel comfortable enough to return to ICU and even then I could only work part-time. But this was a huge step to getting back on the path to become a CRNA. Around this time I also completed my bachelors’ degree in Nursing. I would later go on to obtain my CCRN and take the GRE. The next step was applying for nurse anesthesia school.

With the progress I had made on my plan to become a CRNA, I was ready to start applying to nurse anesthesia programs. I was excited but also nervous at the same time. I mean extremely nervous because I had a huge public speaking phobia which seemed to occur speaking to more than 2 people at once. This was a major concern because some programs do round table interviews.

My first interview came around 2011 and did not go well at all. My biggest fear came true that day. Sitting at the head of the table and people throwing out questions at me. Needless to say, I did not do well. I pretty much cried all the way home on the airplane. 1st rejection letter.

My next interview a few months later went great in my opinion. Due to my public speaking phobia, the one on one interviews were a godsend. It went exceptionally well but ultimately this program used a point system and I came up a few points short. 2nd rejection letter. I gave up at this point. Maybe this is not for me.

Back on The CRNA Journey Again

In 2014, I attended a Diversity CRNA Information Session and Airway Simulation Lab Workshop in Portland, ME. During this event, I realized I had to keep trying on my journey to become a CRNA. Hopefully, the 3rd time would be the charm.

I applied a 3rd time and low and behold I was placed on the waiting list. Not exactly admitted, but definitely not rejected. There was still a chance. My everyday focus became how do I show the program director I really want this. So I began to email and call to check on my application. I also sent a portfolio of all the things I had accomplished as a registered nurse over the years.

After speaking with the program director on the phone one day she voiced how I was the only waitlisted candidate to ever check on their application. At that moment I believe she felt how badly I wanted this. The next day I received a call stating I was admitted into the program to begin in May 2015.

My family along with myself of course moved over 1000 miles to follow my dreams of becoming a CRNA. I spent the first year trying to figure out how to study, overcome my fears, and balance family and school. Honestly, I lacked the confidence I needed to get through the program and there were a lot of ups and downs.

I spent the next year praying, listening to church sermons along with studying just trying to take it one day at a time. Thankfully, during this time things shifted for me and I began to find my way. I figured out to how to learn an abundance of material in a small amount of time. I also created a more manageable plan which led to less anxiety.

In that year, my confidence went through the roof and I realized I could do anything and nothing was going to stop me. Thank God! This was what I was praying for all along.

The Moment When I Realized It Was All Worth It

In my last semester with only 3 months left in the program I presented my thesis in front of 100 or so people. Well maybe not that much but it sure seemed like it. Anyway, after I presented my thesis titled “Enhanced Recovery After Surgery For Former Substance Abuse Patients” nearly everyone was emotional or crying.

Rightly so, because I presented my thesis by incorporating a story into my research of a young man, Max Baker, who had battled substance abuse and won the fight. Well, at least for the moment. His downfall began after having surgery. He began taking narcotics, relapsed and ultimately overdosed leading to his death.

As I made my way to my seat after receiving a huge applause, the assistant program director came over to me. She sat down and whispered in my ear and I will never forget it…. You started off slow but you are here now… you are going to be an excellent CRNA.

The Bottom Line- Change the Plan But Never the Goal

Becoming a CRNA isn’t impossible. If you are like me, you had a plan in place. But your plan was torn apart multiple times. “Thinking it will never be. Thinking I am not smart enough. Or I have no money or resources for CRNA school”. You Can. And You Will.

No matter what it looks like right now, you can start taking steps towards your journey to become a CRNA. You just have to find a way to make it work. Adjust your plan and believe. It’s not a sprint. It’s definitely a CRNA Journey.

The First Step Is Just Starting

In order to become a CRNA, you basically just have to start somewhere. I would first ask yourself WHY you want to be a CRNA? Knowing why will help you figure out how to achieve your goals. It will also give you courage to keep taking risks and forging ahead with your plan.

Also staying motivated and keeping your spirits high will sustain you when you have setbacks. During those setbacks, take the time to think of all your past successes on your CRNA journey. The end goal should always be your #1 focus. 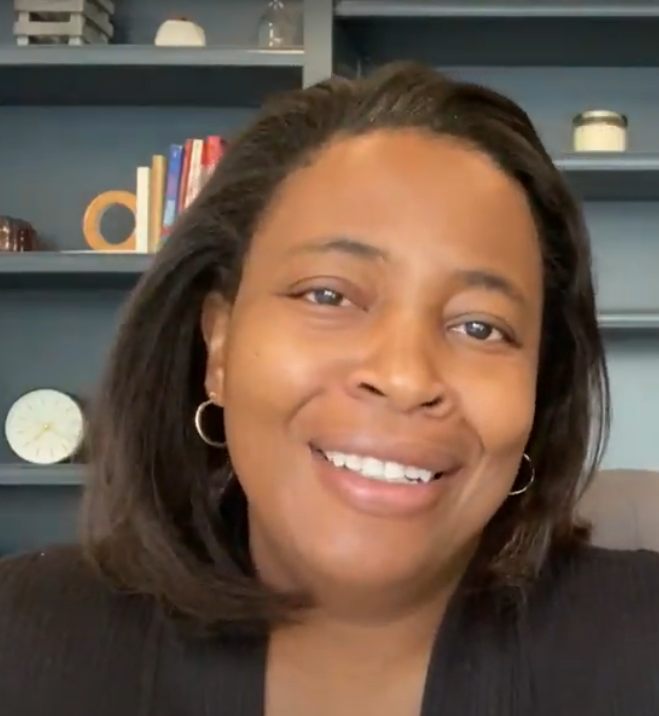 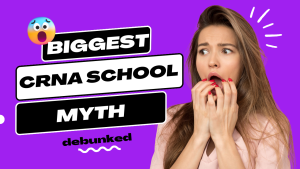 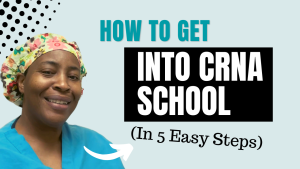 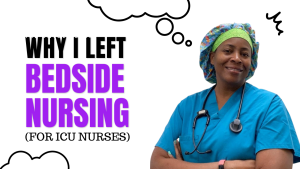